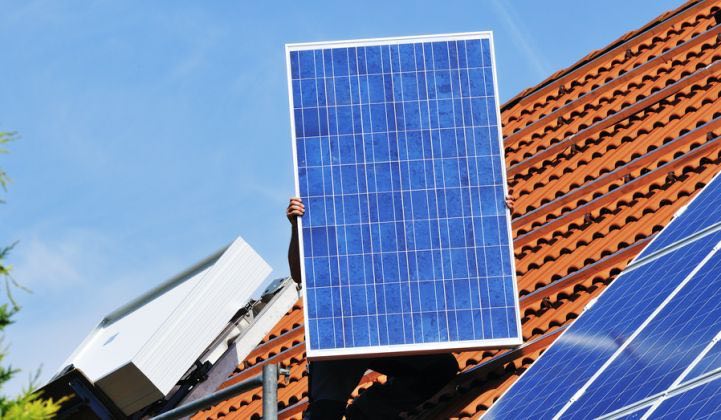 At the time when we were planning and designing our new house we considered solar panels. However our builder felt it wasn’t a good idea, mainly I suspect due to cost and return on investment. But six years later the ballgame has changed.
The cost of panels and inverters has come down considerably, and also the state government is offering a rebate of over $2200 for eligible properties.
With this in mind and having determined that we were eligible for the rebate, I decided to do some research to determine whether the installation of solar panels is economically viable for us at our stage in life. I might also add that our motives are probably 90 per cent economic and 10 per cent altruistic.
To start the ball rolling I needed to get a handle on our past electricity usage as well as getting some output statistics for common solar panels.

When Dan the Man offered $50 to compare retailers via Victorian Energy Compare, I figured that the effort involved was justified given that there was half a dozen bottles of wine at stake, always seems better than just $50.
During this process I found that registering with My Energy through my electricity provider, Powercor, I had access to our energy usage every half hour for the previous two years. This provided a much better granularity than past electricity bills which were monthly.
Through direct contact with Powercor I was able to get the two years extended to four years, beginning from just after we moved into the new house.
I wrote an Excel vba application which converted this comma separated variable (.csv) file from its format to one as a simple file of one line for ever half hour, with date, time and energy usage for that half hour. This consisted of over 70,000 lines (four years, 365 days a year, 48 half hours).
Given that batteries are still expensive we couldn’t justify them at this stage. They can always be added in the future. So without batteries we are definitely having to pay for electricity from the grid at times when the panels are not generating at all – i.e. sunset to sunrise; and during times when the panels are generating, but insufficient to cover the needs of the house.
In addition, even if we were able to cover all our usage needs, we must still pay for the service charges.
To get actual night usage, I downloaded average sunrise sunset times for each month of the year. I then wrote an Excel vba application that went through each of the more than 70,000 half hour records and determined from the date and time of the record whether it was before sunrise or after sunset, in between.
This application also blocked off all records into months within years (Jan to Dec, for years 2015 to 2018) listing night usage, day usage and total usage. I then averaged each month across the four years that gave me average values of night, day and total usage for January to December.

I was able to download average output from LG panels installed efficiently, i.e. facing North, at the correct angle and unshaded for Torquay where we live.
This was the best I could do, as we had not even considered an installer let alone equipment at this stage.
These values were average for each month of the year based on a 5kW installation, but were obviously scalable to any size installation by ratio of sizes. I made the assumption that the averages were during daylight hours and not a 24 hour average (note: this assumption has been borne out with actual values, post installation). Because the above solar panel values were monthly based, this is why the usage values were also generated on a monthly basis, rather than daily.
So I now had for each month, the night usage, which I must get from the grid and pay for, the day usage which I could offset against the average panel output, and any feed-in where the generated output exceeds the house usage.
I had previously written an Excel vba application that accurately calculated both my electricity and gas bills based upon last bill date, current bill date and usage. I was able to therefore calculate the total cost to me for each month, by using the same model.
These costs were:
– Usage during the night;
– Usage from the grid where average house usage exceeded panel output;
– Service cost for each day of the month;
– Feed-in where panel output exceeded home usage.
The values in the spreadsheet above can be scaled to any size of solar panels. The spreadsheet has the system rating cell set at 5.4kW.
The yellow button has vba code that cycles through the system sizes from 0 to 6 kW along with 5.4kW. The last column near the bottom of the sheet indicates the savings for each size of installed panels. The column “Total Elec Cost less Feedin” is the anticipated yearly cost to me.
The cost at zero kW is the base for the savings, as this is effectively the cost without solar panels. As the solar panel output is increased the cost to me is decreasing, and the savings increasing. These savings are based upon our current pricing from our retailer, Simply Energy, and the standard feed-in tariff of 11.3 cents per kWh.
So we were able to determine that an installed panel size of around 5-6kW would give us savings in the order of $1000 per year.

The decision to proceed

We had been seeing ads in the paper from one or more suppliers that advertised 6.6 kW systems without batteries for under $3000 after Dan’s solar rebate. However the old saying “if it sounds too good to be true it most likely is” was in the back of our minds, so we decided to get a quote from a local (Geelong) supplier.
This quote was for a 5.4kW system using Suntech 305 watt monocrystalline panels and a Fronius Primo 5.0 Inverter. And of course this price was more realistic than the ads we had seen from some Melbourne suppliers.
As our panels were not LG as in the spreadsheet, I then updated the sheet to reflect the Suntech panels. My logic said, and this may be open to conjecture, that the outputs would be proportional to the published efficiencies of the panels.
LG had a published efficiency of 19.3 per cent for a specific panel, while Suntech had a published efficiency of 18.6 per cent for our quoted panel. The LG panels were quite a bit more expensive than the Suntech, so we chose the Suntech for the quote.
So I massaged the monthly output of the LG panels by the ratio of the efficiencies and used the updated values in the spreadsheet, and for a 5.4kW system our savings, as shown in the spreadsheet, were $1057 per year. Based on our quoted price we would pay the system off in under five years.
We reckoned that we would still be alive at that time so decided to proceed and have the panels installed.

Installation was completed in mid-February, took around five hours to complete, and was generating straight away.
The Powercor csv file that contains the previous two years of usage at half hour intervals showed that in several instances (five or six hours) during the daylight hours, the usage was zero indicating that all the home usage was supplied by the panels.
There are some processes after installation that must be completed before I can begin gathering statistics to justify the purchase.
Once installed, it has to be inspected to ensure it is safe to feed excess generation into the grid. I suspect part of this inspection is to check that the inverter does not supply power to the grid during a grid outage, obviously for safety reasons for maintenance people working on the outage. This has already occurred for us, and a certificate issued to the installers.
At this point, documentation is sent to the providers – Powercor, in our case – who will then make a change such that any feed-in is read from the smart meter.
Without solar panels it is only reading imported power – i.e. item 3 from the smart meter. After the changes made by Powercor their system will read exported power, item 5 on the smart meter. In addition, the feed-in energy will be reflected in the detailed version of the .csv file and also on subsequent electricity bills as a credit.
I’m still waiting for this process to occur, but have done the groundwork on a new spreadsheet to provide me with an indication of savings on a daily basis.
Even though I don’t have the .csv file in its final format as yet, I was able to download a .csv file via a neighbour that has had solar for a while and whose .csv file reflects his feed-in energy.
While his data is not mine, it allowed me to set up the spreadsheet and vba code such that when all the processes are complete I can start generating the info I need to get exact savings.
The three pieces of info that form the basis of this new spreadsheet are:
– The output from the panels;
– The imported energy from the Powercor .csv file;
– The exported (feed-in) energy from the Powercor .csv file.
In terms of output from the panels, the Fronius inverter provides two mechanisms to retrieve this data. Firstly the DataManager inside the inverter has provision for a memory stick, which will record panel output on a user specified interval, 30 minutes in my case.
This data is written to a .csv file on the memory stick, which can be read directly by Excel in the same manner as the Powercor .csv file.
In addition, the inverter, once configured correctly, will connect to your normal wifi router and send data to a Fronius website called SolarWeb.com. Logging on to this website will allow the user to access and download all the data. In addition, a phone app is available that provides some, but not all the data. I chose to use the memory stick to access panel output.
The spreadsheet which is still a work in progress until I can get feed-in data is shown in table 2, and while the inverter output is definitely actual the other fields are test only. However it shows the sort of info I’m looking for.

Garth Brockett is now retired after about 35 years in the computer business, mainly in systems analysis and systems programming, much of this time in the airline or airline related business. Graduated from Melbourne University as an Electrical Engineer and spent several years in the engineering profession with ASEA in Sweden. Thereafter made a career move into computing and spent nearly five years in Minnesota, USA developing system software for Sperry Univac, later to become Unisys. He still loves programming and has a strong interest in micro controllers such as the Arduino.