A new report has warned the federal government to budget for the inevitable shift from petrol fuelled cars to electric vehicles in Australia, not just to provide the necessary infrastructure, but because it will take a huge chunk out of future road revenues.
In its inaugural five year review – delivered to government in August and released to the public on Tuesday – the Productivity Commission highlights the need for reform in the funding of and investment in roads, which it notes is the single largest item of infrastructure spending for governments.
Of particular concern is the fuel excise. This tax, unlike licence and registration fees, is charged to consumers by the federal government, and accounts for nearly 50 per cent of all annual road fees and charges levied by both state and federal governments.
So it has been a major earner for Canberra. But not for much longer, warns the Productivity Commission.
“Up until now, road-related fees and charges have generated sufficient revenues to meet road spending needs,” the report says, and the chart below illustrates. “Looking forward, however, this will not be the case. 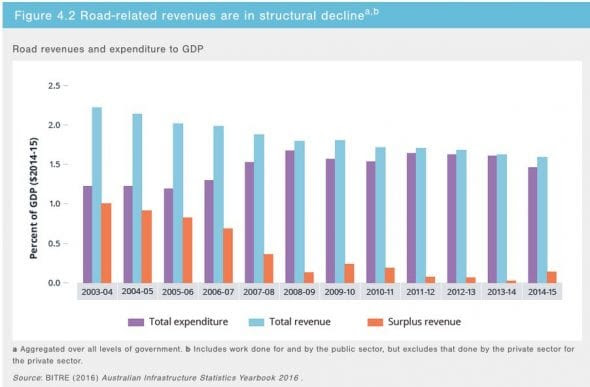 “It is projected that road-related revenues will fall in real terms relative to demand for road services (even under conservative assumptions about population growth).
“In particular, fuel tax revenues (the largest single road-related charge, accounting for about 45 per cent of total road-related charges in 2015-16) have declined and are projected to continue to fall in real terms due to the improved fuel efficiency of cars, changes in travel preferences of commuters, e-commerce and the anticipated shift toward electric vehicles (which use no fuel, or little in the case of hybrids) — all of which reduce average fuel consumption.
“At the same time, automated vehicles and new technologies enabling more convenient ride-sharing are revolutionising transport. Though nascent in Australia, they have the potential to substantially improve overall network efficiency, and individuals’ mobility,” the report says.
“To the extent that newer and automated vehicles are electric (or hybrid electric) powered, an increase in their use will exacerbate funding pressures.
To counter this, the Commission suggests a major shift to the federal government’s revenue gathering system that doesn’t discriminate by vehicle type, and is directly related to actual road usage.
“The looming pressure on fuel excise as a source of revenue is primarily a shift that involves private cars,” the report says. “The solution — if taxpayers in general are not to pay more — must involve pricing the movements of light vehicles as well as heavy vehicles.”
Done well, the report says, the changes could even turn out to be a boon for the national budget.
“The value of more efficient use of the road network alone is estimated to be equivalent to approximately 0.7 per cent of GDP in the long run, or a permanent increase to the level of annual GDP of approximately $20 billion.”
Over 20 years, the net GDP gains would look more like $63.7 billion, the report adds, or $4.5 billion in annuity value terms (taking into account a phased introduction of reforms).
“On top of this, there would be allocative efficiency benefits from the closer matching of services to those actually preferred by road users, and reduction of inefficiencies associated with poor project design and delivery,” it says.
The Productivity Commission recommendations follows a separate report on electric vehicles last week – a joint release from the NRMA and the Electric Vehicle Council – that warned that EVs were “coming to Australia at a rate of knots,” and that Australia was unprepared for their arrival.
Behyad Jafari, CEO of the Electric Vehicle Council said the findings of that report represented the need for the government to support the move to electric cars, especially due to the benefits they could bring.
“There is a reason why governments [around the world] are intervening to transition fleets from petrol and diesel to electric,” he said.
“It’s one of the more efficient ways to reduce emissions. That includes improvements to air quality and recognising that this is a new technology that is continuing to get more efficient and is growing around the world.
“The largest role here is for the federal government to send an ambiguous message to consumers and industry that it supports this transition to electric vehicles. That means providing incentives or tax exemptions for the purchase of electric vehicles and having a nationally coordinated plan for the transition of our road fleet.”